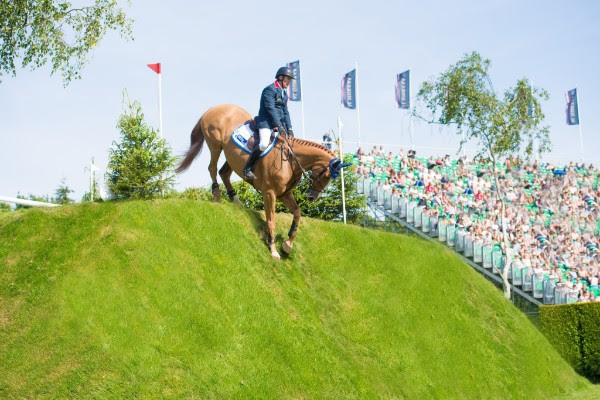 Riding the homebred 10-year-old Billy Buckingham, William was one of just two riders to go clear in the first round, meaning he had to jump-off for honours against Holly Smith and Quality Old Joker.

The first to go in the jump-off, William’s horse never looked in danger of touching a fence, although a foot in the water meant they finished with four faults in a time of 89.62sec.

It gave Holly a bit of breathing space, but she was caught out first by the black gate and then by the water as well, meaning she retired into second place.

William, 52, is the fifth rider to have four wins in the Hickstead Derby, having previously clocked up a hat-trick of victories in 2006, 2008 and 2009 with Cortaflex Mondriaan. He joins Harvey Smith, John and Michael Whitaker, and Ireland’s Eddie Macken, who have all had four wins in this iconic class.

The Dorking-based rider now believes he could add to his Derby tally with Billy Buckingham. “As long as I’m fit and the horse is fit you’d like to think you could go on and win it a fifth time. It’s nice to be in the record books with those guys, and to do it this year on a home-bred is special,” he said.

His horse was previously ridden by Lucy Townley, the daughter of Hickstead Director Edward Bunn. William took over the ride in 2017, and the pair finished sixth on their Derby debut last summer having hesitated at the top of the Bank and getting a time fault as well.

“We’ve done a bit of practice to make sure he’d come down the Bank. Last year I wondered if I’d wasted a clear round because they don’t come round here very often, so it’s nice to get another one and win it on a home-bred by [William’s championship horse] Billy Congo.”

“I’d like to congratulate the Bunns on the work they’ve done in the arena, this is the best grass ring in the world with the best footing,” added William.

Holly was bidding to become the first female winner since 2011, and only the sixth in history, but she had to settle for second place following her third place debut in 2017 with Quality Old Joker.

In equal third place was the ultra-consistent Harriet Nuttall and A Touch Imperious, who yet again left all the fences standing but were another pair to be caught out by the 15ft Open Water; and Shane Breen and his Bunn Leisure Derby Trial winner Can Ya Makan, who knocked down the Balustrade fence at 14.

James Whitaker ended up in fifth place with one fence down and a time fault on Glenavadra Brilliant, the horse James’ elder brother William Whitaker rode to victory in 2016.

The Al Shira’aa  Hickstead Derby Meeting drew to a conclusion today, with the classes available to watch on demand on ClipMyHorse.TV. Television highlights will be shown on Sky Sports Action on Wednesday 27 June and on Horse & Country TV on Tuesday 3 July.

The organisers of the All England Jumping Course are sad to report that Navalo De Poheton, the ride of the USA’s Andrew Kocher, was fatally injured while competing in the Hickstead Derby today (24 June). The 17-year-old gelding broke a leg on the flat, and despite receiving immediate veterinary attention in the ring he was not able to be saved. The Bunn family and the title sponsors Al Shira’aa expressed their condolences to the horse’s connections, and praised the swift and professional reactions of the Arena officials and veterinary team.