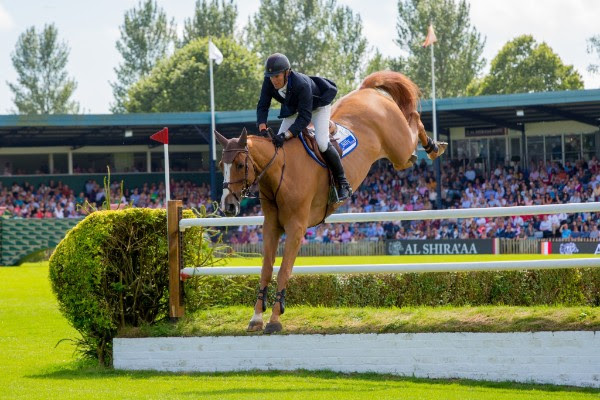 International showjumper William Funnell is hoping to achieve a fourth win at this month’s Al Shira’aa Derby at Hickstead.

The Surrey-based rider has a very good chance of adding to his tally of wins with the talented Billy Buckingham, who finished sixth in the class last year. The pair left all the fences standing, but a hesitation at the top of the Derby Bank resulted in a backward step and four faults, along with a single time fault.

“I was very pleased with the horse’s first attempt – having left all the fences up, it was technically a clear jumping round, and those don’t come around very often in the Derby,” says William.

Although the Bank caused them issues twelve months ago, William believes this year the horse will be more confident about going down the famous 10ft 6in slope.

“Now he’s been down the Bank safely, I’d like to think it was a nice experience for him. Billy Buckingham is quite a sensitive horse, and when you’re at the top of the Bank there’s a fine line between reassuring the horse and overdoing it. If you’re too strong and use too much leg, he might think there’s something to be wary of,” William adds.

According to Funnell, the 10-year-old homebred is reminiscent of Cortaflex Mondriaan, the horse who gave him three Hickstead Derby victories in 2006, 2008 and 2009. “Mondriaan was a pure natural, and while Billy Buckingham hasn’t got the same experience he feels as much as a natural as Mondriaan, so I’d like to think he’ll have his chance too.”

While William holds a place in the Hickstead history books as one of the few three-time winners, he has come very close on several other occasions. In 1997, he finished runner up after Comex knocked down the 1m high jump on top of the Derby Bank, and in 2012, he jumped a clear in the first round with Dorada but ended up second to Ireland’s Paul Beecher after a jump-off.

“There are a lot of unlucky stories in the Derby,” William adds. “With 21 jumping efforts, it’s common to have just one fence down that costs you the win. I’d always wanted to win the class and to have lost on Comex because of knocking down the smallest fence on the course was really tough. Although it was disappointing to come so close with Dorada as well, it was a bit easier because I’d won the class three times by that stage.”

William now bids to join the elusive group of four-time winners, including Harvey Smith, Michael Whitaker and John Whitaker. Ireland’s Eddie Macken is the only rider to claim four consecutive Hickstead Derby titles, having won every year from 1976 to 1979 with the incomparable Boomerang.

The Al Shira’aa Derby at Hickstead is now in its 57th year, but William believes it has lost none of its magic. “For me, it’s the most exciting class in showjumping in the UK. For the public, it’s special, because the course stays the same every year, and everyone knows the history of the class. It’s always been my ‘local’ show and winning the Derby was always something I aspired to. It’s a big part of my season every year.”

William Funnell will be among the main contenders for this year’s Al Shira’aa Derby, which takes place on the Sunday afternoon of the Al Shira’aa Hickstead Derby Meeting (21-24 June).

Tickets are on sale now from www.hickstead.co.uk with discounts available to those booking online in advance of the show.