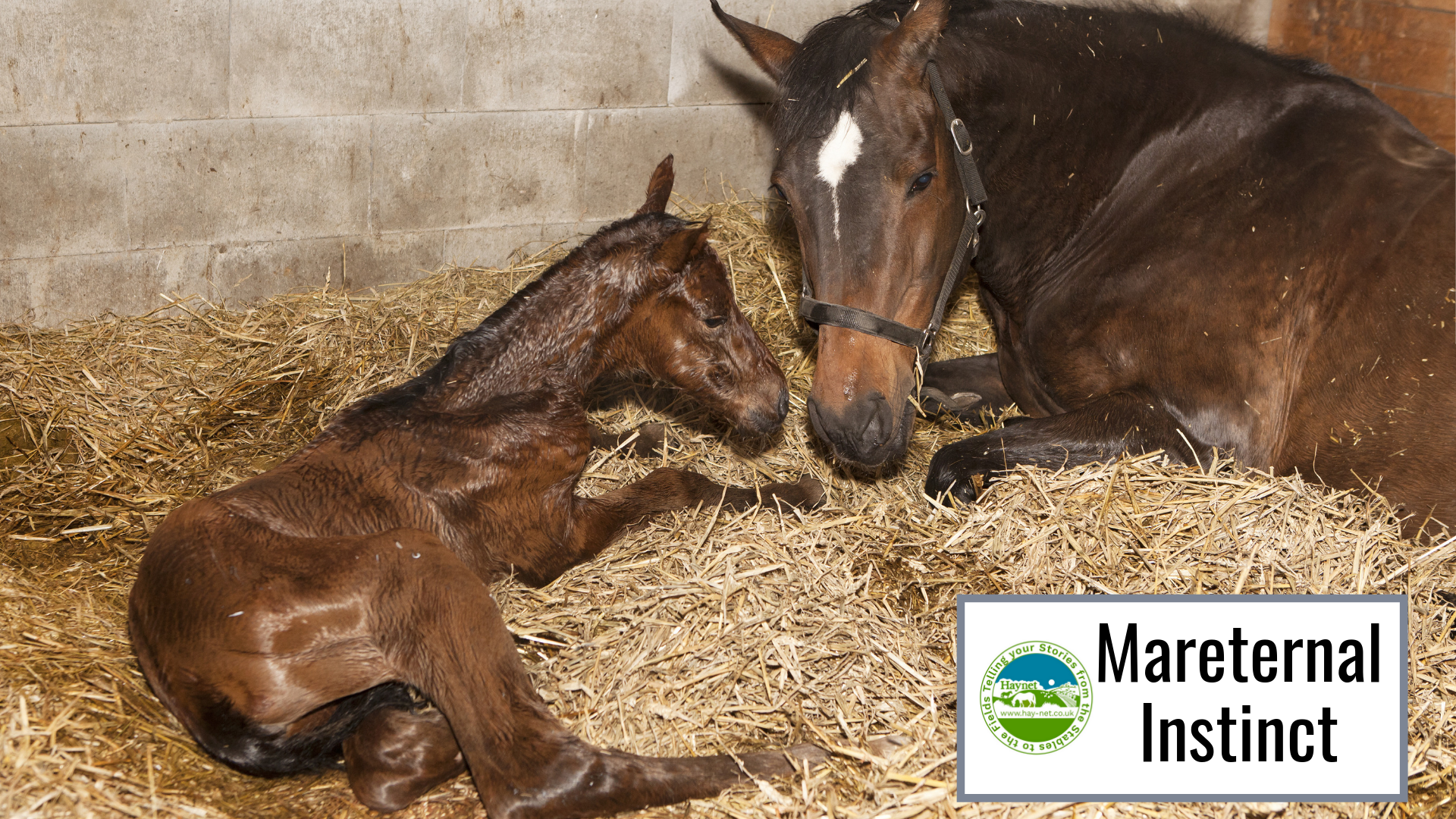 Forget about internet dating. Choosing a mate for Maddona is a serious business.   My kitchen table is buried beneath mounds of glossy brochures, all highlighting the virtues of prospective fathers – easy to handle, kind temperament, combines good looks with superb performance. Each mate sounds more tempting than the previous one – there is a well muscled hunk from Connemara, a very tall, slender chap with an expensive sounding address and even a handsome Arab who lives close to the beach in Bundoran.  As I flick through the brochures, admiring the flattering photographs and pondering over the tempting descriptions, a loud snore reverberates through the air. With a bitter sigh I glance across the room to where The Husband lies comatose on the sofa. His arms are folded across the gentle mound of his belly, his cheeks quiver as each breath is exhaled. If only I could have selected my mate from a glossy brochure.

Far more attention seems to be paid to the choice of partners in an equine pairing than ever is in a human one, with the perfection of the resulting progeny being of the greatest importance. Maddona’s mate has to have a well set on neck, to hopefully counteract hers, which is set rather high. He also has to have wonderful action as hers leaves more than a little to be desired. Little thought was ever given to these finer points when The Husband and I got together.  Finally the choice is made and as I have the self appointed role of matchmaker, it is up to me to visit the prospective mate to see if he is all that he is supposed to be. Danny Boy is an impressive dark grey Irish sports horse, who has won prizes in show jumping competitions. Maddona shows little interest when I show her the brochure with a colour photograph of her first mate. But then I guess, this is not going to be a life time commitment for either of them.

Field Park Stud was everything that I had expected a top class breeding yard to be. Peter Keogh, the owner showed me around a smart quadrangle of stables, where I met beautiful mares and youngsters. After the tour of the premises Peter sent Micky, his head groom to lead out the stallion for me to have a look at.  Danny Boy is led out of his stable and along a concrete path towards me. He walks with the swagger of one of the teenage yobs who hang out in the shopping centre – all that he lacks is a hoodie and an MP3 player draped around his neck. The stallion is very handsome, muscles bulge beneath his shining coat; his mane and tail have the appearance of spun silk. Suddenly something catches Danny Boy’s attention and the mighty stallion plunges, shaking his head arrogantly, sweeping Micky, his ancient groom off his feet, where he dangled for a moment in mid air, swinging from the reins, feet peddling furiously until the stallion carelessly deposited him back onto terra firma. “He’s as gentle as a lamb,” Micky grinned in my direction, but I could see, from my safe position behind the fence, that a line of sweat had broken out beneath his flat cap.

Maddona was duly delivered to Field Park Stud a fortnight later after an injection from the vet, designed to bring her into heat. I watch anxiously as Micky and Peter prepare for her few minutes of romance.  I find myself pondering briefly what these guys do in their spare time. Once Maddona is trussed up to their satisfaction Micky darts off to fetch Danny Boy. All my illusions of equine romance are hastily shattered. Danny Boy is no Mills and Boon hero. There was no courtship; actually, Danny Boy did not even introduce himself. I do not profess to know much about what horses think, but I could certainly understand the wide-eyed look that Maddona gave me as Danny Boy pranced towards her. It was all over in seconds and then Danny Boy was cropping the grass at the side of the yard without even a backwards glance in Maddona’s direction. The male in every species seems to be totally lacking in the romance department.

The indignity continued when the Vet came to scan Maddona to check if she was in foal. There was much horrified eye rolling, on her part, when he marched into her stable dressed in a long green gown, armed with a long rubber glove and a lot of high tech machinery. The oval shaped blob that appeared briefly on the screen confirmed the good news. Maddona was in foal.

And that was when my imagination took flight.  The long, boring days in the office ceased to exist as I daydreamed for hours about Maddona’s foal. In my imagination I saw the foal, fully grown and somehow miraculously having become a top dressage horse and eventer, performing faultless flying changes and flying over the biggest of fences.

There was never a pregnancy that was treated with more care. Maddona had the best of everything, much to the chagrin of The Husband.  Maddona bloomed over the summer and ballooned over the winter. By April her belly was enormous and her expression resigned as she plodded around the field. She spent hours standing in the shelter of the hedge as if it were too much effort to move around. By May she had developed a resentful glare, which she shot in my direction every time I went to fetch her in from the field, as if she felt that I was responsible for her condition.   As the Big Day approached I watched Maddona anxiously for any change that would indicate that the birth was imminent. I developed a crick in my back from bending down to peer at her udder.

The day dreams of my performance horse had ceased and been replaced by nightmares about ‘things going wrong with the birth’. I took to waking in the middle of the night bathed in sweat after lurid dreams of breech births, tangled limbs and two headed foals. Giving birth was far too dangerous, no matter what the vet said about 99% of mare’s giving birth perfectly normally. That still meant that it went wrong for 1%. That convinced me – there was no way that Maddona could be allowed to go through the trauma of giving birth alone.

I was going to be the best birthing assistant ever. Having seen the mess that The Husband had made of the job I was determined to do better. Maddona was to be spared the indignity of having someone by her side yelling ‘Push, push’, as if he were at a Rugby match, and then falling onto the floor in a dead faint the moment that the baby emerged and having to have all of the nurses step over him while they tried to attend to the important players in the birthing drama.  As any fool knows ‘a watched pot never boils’. And so it was with Maddona’s foaling. I rented a foaling camera, designed to relay pictures from the stable to my bedroom, so that I could rush to Maddona’s aid when the foal was being born, but no matter how I positioned the camera, she kept moving out of the screen. In the end I took to sitting in the stable with her. Night after night I sat patiently, huddled beneath a blanket in a corner of the stable, watching Maddona. Night after night Maddona watched me, a slightly bemused expression on her face. “Mare’s prefer to foal on their own,” The Husband  dared to venture one night, watching me spooning three spoons of sugar into a mug of extra strong coffee. “Hhhmmmmph,” I growled in reply, since I was becoming quite tired and tetchy by this stage. “Night”, he said in a resigned tone, opening the kitchen door to let me outside into the bitterly cold night.

Maddona sighed as I settled myself into my usual spot in the corner of her stable and prepared for my nightly vigil. It was quite cosy, with a sleeping bag around my legs and a tartan rug around my shoulders. In fact, very cosy…….. I woke with a start…….it was dawn. I saw the first grey and pink light just beginning to streak the sky through the open half door of Maddona’s stable. I stretched my stiff legs, easing aching muscles. It was still quite dim in the stable, but as I looked at the mare I could see that she was not alone. Standing next to Maddona was the most exquisite long legged foal. The mare and foal were looking at me curiously – and I could have sworn that they were both laughing.