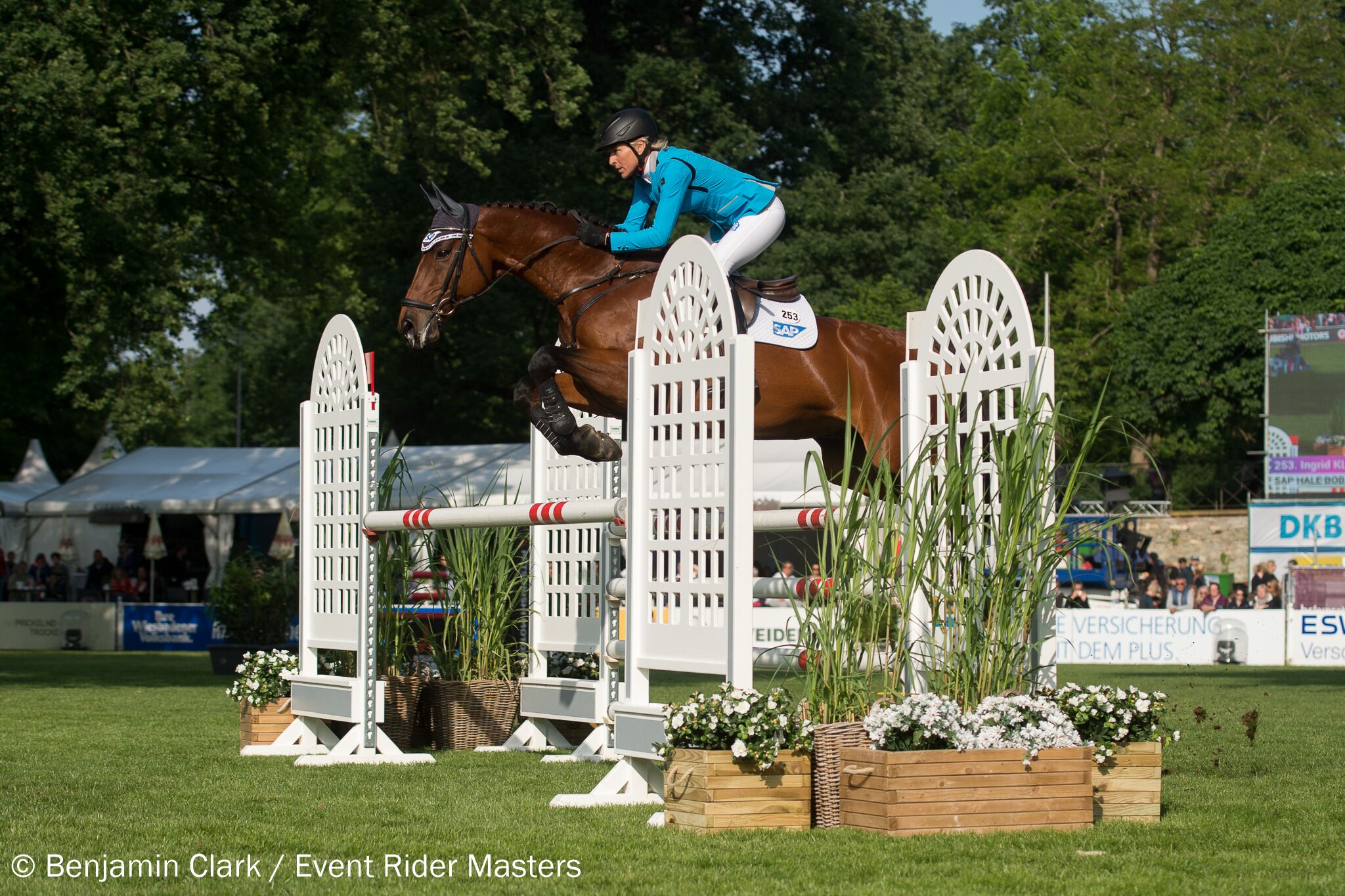 With the top three FEI Ranked Riders in the World, among the entries, the competition promised to be fierce right from the start.

In a Leg that produced both the highest ERM Completion and Cross Country clear jumping rates, the Home Nation’s Ingrid Klimke and SAP Hale Bob OLD, held their nerve to finish on top of the Podium with 3 seconds to spare. 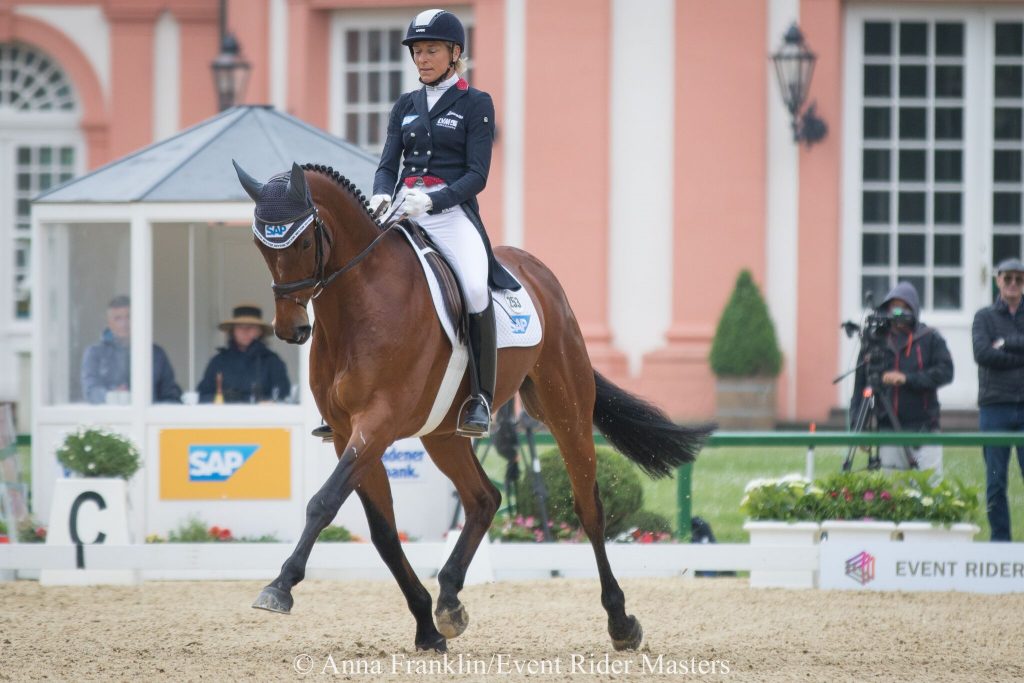 “Bobby did such a wonderful job today. It was the best feeling to ride through the Schloss Park with so many people cheering us on.” Said Ingrid after taking up her place on the top of the podium.

European Gold Medallist Ingrid Klimke came into the competition as the EquiRatings favourite to win. As second last to go in the dressage, the expectations were high for Ingrid and her European Gold Medal Partner SAP Hale Bob OLD. Beginning her dressage test trending on scores in the teens they finished just .6 of a penalty in front of the World Number 1, Oliver Townend. Tension was high as they entered the show jumping arena, a foot perfect clear ensured they kept hold of their lead. As the final combination to head out on the twisting Cross Country Course, Ingrid was determined to ride fast and clear, which is exactly what she did to claim the Wiesbaden ERM Title.

Recent Land Rover Kentucky CCI4* Champion and FEI World Number 1, Oliver Townend produced a stunning test with Sally-Anne Eglington’s Cillnabradden Evo to begin their ERM season in style. Scoring an incredible 22.8 and beating their CIC3* Personal Best by 2.5 marks, the pair held on to the top spot for the majority of the dressage day. Jumping a stunning clear and adding nothing to their dressage score in the show jumping phase, the pair headed out on the Cross Country course as the penultimate combination and held their 2nd place.

“I am thrilled with the horse,” said Oliver “To get so close to Hale Bob is very special and I couldn’t be happier with how he has performed.” 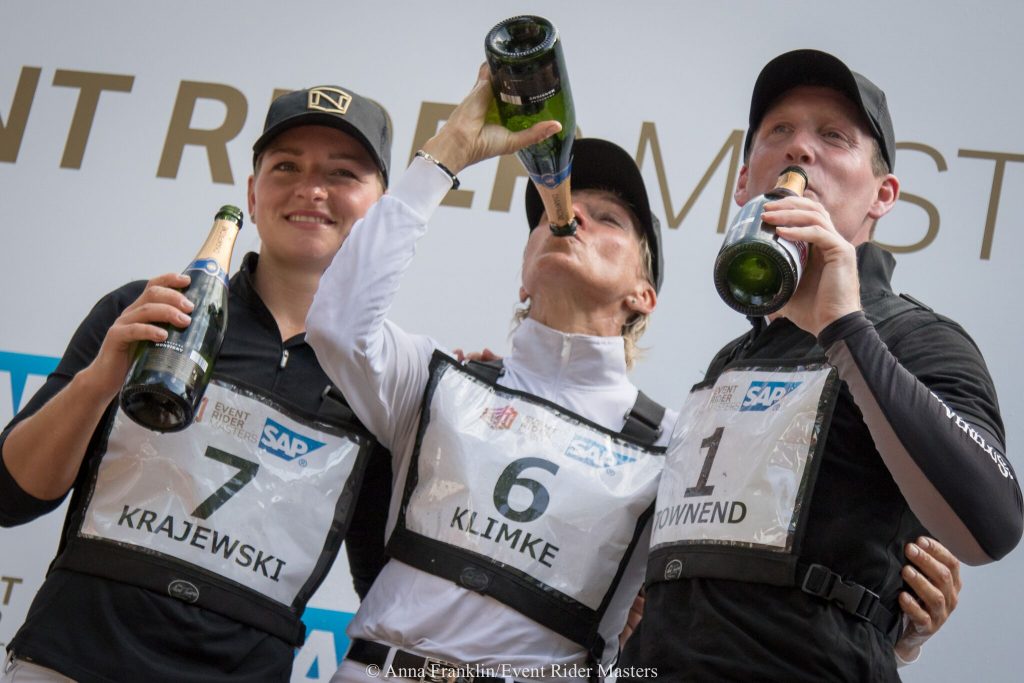 Speaking after cross country Krajewski said, “Sam loves it here and he’s always been really comfortable in front of all of the people watching him. I was maybe a bit conservative at the start but by the end I could let him run and jump. He really loves his job and I love riding him. I am very proud to share the podium with two legends.”

World Number 3 Tim Price (NZL) and Joanne Pullen’s Cekatinka scored a disappointing 31.4 in the dressage, which left the pair in 7th place going into the show jumping. With just one pole down to add to their score they headed out on the cross country in 8th. After a clear and fast cross country round, Tim and Cekatinka finished on their post show-jump score of 35.4 to climb from 7th to 5th on the final leader board.

“I’m super happy with the Mare, she went out there and gave it her all showing everyone the class that she has!” commented Price.

Michael Jung and CIC3 star debutant Corazon, scored a respectable 34.8 in the dressage to leave them in 15th place before the show jumping. The World Number 2 added 2 show jumping time penalties to his dressage score, going into the cross country in 9th position. Putting in a masterful performance on the 8yr old Mare, Michael added 5.2 time penalties after the Cross Country to sit on 42.4.

Speaking after his Cross Country round Michael said of Corazon, “She is really growing up and getting more experience – she is really starting to believe in herself more I am very happy with her.”

WATCH all of the action from the Event Rider Masters 2018 Series on https://www.eventridermasters.tv/