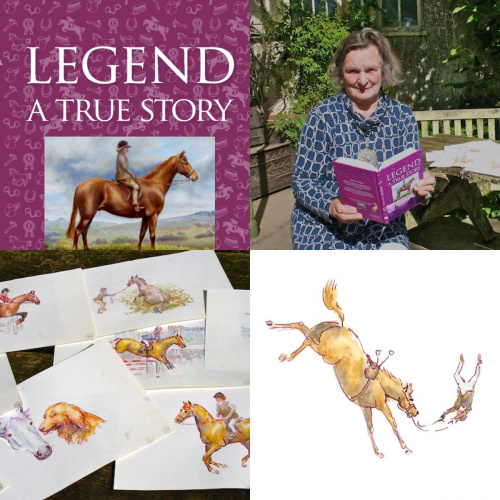 This beautifully produced hardback book, complete with its own bookmark is guaranteed to delight horse and pony lovers of any age. The book is illustrated with reproductions of the author’s water colours.

Legend is actually two books in one. The first is a biographical account of the author’s childhood and her association with a 13.2 pony called Legend, who was a hugely prolific show pony in the years after WWII. Legend still holds the record for winning the Rawnsley Challenge Cup three years running at the Royal International Horse Show.

Legend was bred in Devon by the author’s grandmother, Ruth Howard. Elizabeth Spencer and her mother stayed in Devon during the war where her association with Legend began. After being unceremoniously bucked off while breaking Legend in aged just five, she is given the pony for her birthday. At seven years old she begins to show Legend and thus begins a hugely successful showing partnership going on to win over a hundred prizes and championships.

The first part of the book, told in Elizabeth’s words, is apart from the incredible story of their partnership, a fascinating account of the war years and life in those times.  Because petrol is in short supply Elizabeth’s mother trains her point to pointer to pull the family trap, with limited success. The book is filled with recollections of the times, where the horse world was very different from ours. It is hard to imagine anyone travelling a top show pony in the back of a furniture lorry with the family’s possessions.

After one win, Elizabeth recalls being congratulated by Harry Llewellyn who asks if she would like to ride Foxhunter in the collecting ring and describes jumping him over the practice fence. She goes on to ride show jumpers and actually gave up a place on the British Showjumping Team when her husband Frank Kitson was posted to Northern Ireland. She went on to have a successful career as an artist and sculptress.

The second part of the book is told by Legend and is his version of events, from his birth, watching war planes fly over his field to being broken in and his showing career. There are lots of anecdotes about the equestrian world, hunting, showing and Point to Pointing.

Both stories follow the partnership between Elizabeth and Legend, from his early days under saddle right up to his tragic death in Devon after retiring from competition. Both stories contain fascinating insights into a world that has largely been forgotten. Legend is highly recommended; it is well written and utterly entertaining, yet simple to read and is such an important piece of history.