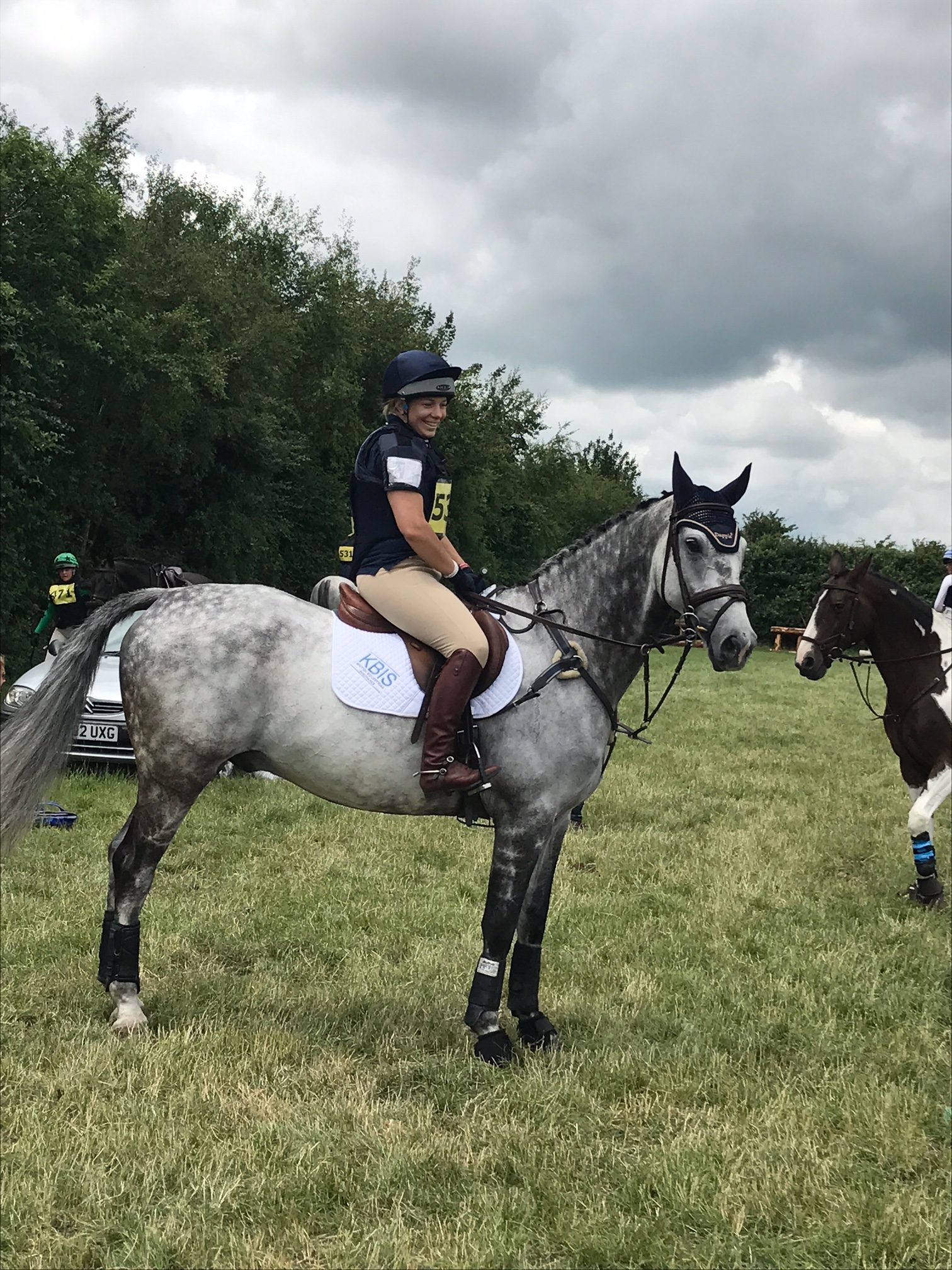 It Takes A Village…. by Inkpot & Press

Having told my husband “no more horses” just a matter of days before I was offered the chance of a lifetime to take on a beautiful grey gelding called Pea, I couldn’t help myself he’s just so beautiful (even husband has fallen in love with him). With Cassini breeding lines and the most gorgeous temperament he is genuinely one of the most talented, honest, friendly horses I have ever come across! He isn’t however, without his quirks…

Pea is sharp, and I mean super sharp… if he can be terrified by a random blade of grass he will be, his own reflection quite possibly is the scariest thing he has ever seen and for goodness sake don’t move your reins once you’re on. But he also has lameness issues, issues that meant that I have been unbelievably lucky and ended up with him in my stables. 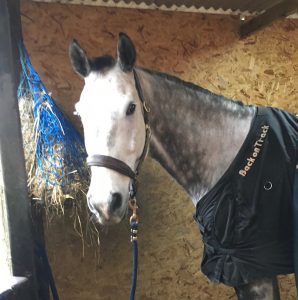 Now as I am a self-confessed geek, I love to learn so investigating Pea’s issues is almost as exciting for me as having him with me in the first place. Luckily he is the sort of horse who would come inside, sit on the sofa & watch TV with you if he could, so getting him to co-operate during the investigations is easy! He simply loves the attention

I brought Pea home exactly a year ago yesterday and had a lovely no-pressure winter with him hunting, jumping, hacking, improving my flatwork and XC schooling with not a lame step in sight. Everything was going very well (too well obviously) until March when he just started to not feel quite right. There was nothing hugely obvious he was just a little bit “off”…

Intermittently lame since then it was decided that we would throw everything at investigating (and hopefully rehabilitating) Pea and his lameness.

The first step was for the amazing Emma Hawthorne of Flawborough Equine to Thermal Image him which would hopefully pinpoint where the issues may be. It is important to note here that Thermography cannot diagnose problems merely direct the professionals to where the issues might be. Pea’s images showed us what we had already suspected, that the problems originated in his feet, but were now radiating up his legs and across his back.

Equine Thermography is a non-invasive monitoring tool used to detect injury and illness through changes and irregularities to a horse’s thermal and neural pattern.

It uses the very latest infrared imaging equipment and computer software – and provides a quick and efficient way to identify trauma and injury.

Many injuries and physical conditions can be accurately highlighted before any clinical signs or symptoms are visibly apparent. And it provides a unique way to monitor a horse before and after competition to ensure it’s in peak condition. Additionally, it may be used to monitor a horses recovery from intense activity, injury and illness.

By accurately pinpointing the location of an injury, Thermography can help to prevent further trauma and in Pea’s case, it gave us the first of the clues we needed. 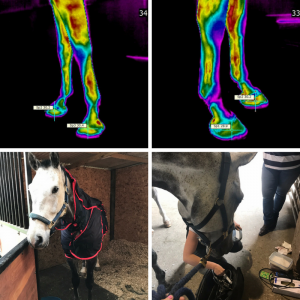 The benefits of Thermography (Thermal Imaging)

After studying the Thermal Images the decision was made to investigate his lower fore-limbs by means of Ultrasound Scans. The lovely Emily from Home Farm Equine came to do them for us and was actually impressed at how good his legs looked. Prior to his scans she had him trotting on concrete both in straight lines and on the lunge in circles – typically he didn’t actually take a lame step at all but we cracked on with the scans in the hope we might find something or at the very least rule a couple of things out.

On the same day Pea was booked in for one of his regular sessions with Equine Massage Therapist Gilliyan Carter Morgan of Equine-Therapy UK. Working on his body as a whole Gilly has been a vital piece in the puzzle, providing an all over analysis of his general condition both muscularly and in terms of the secondary issues that were occurring because of his feet. Pea’s poor confirmation was meaning that his Palmar Carpal Ligament was routinely “popping out” which in turn was causing a negative mechanical effect and meaning he was unable to put his feet down properly. Pea will continue to have regular sessions with Gilly which I would suggest are almost essential to keep him in the best condition possible.

Our next step was to get Pea to see the amazing Gerard xxx, an Equine Body Worker who uses a unique hands-on system which addresses the whole of the horse’s body. By implementing specific manual palpation methods to assess soft tissue and the symmetry of muscle and structure and by utilizing detailed static and dynamic evaluation to inform the veterinary practitioners. Different bodywork techniques — including sports massage, soft tissue mobilization, stretching, range of motion and positioning exercises, as well as “focal” point work (stress and trigger points) —  are combined by Gerard to provide optimal support for horses working in every discipline.

Having received the report from Gerard we made the decision to get further X-Rays. James from Home Farm Equine came out to Flawborough and at the same time, we enlisted the services of one of the top remedial farriers in the country, Martyn Elliot from Retford, Notts. Working together, Martyn and James were able to get the exact images that they needed to be able to see precisely what was causing Pea’s problems. 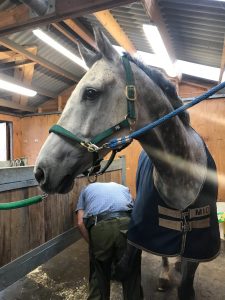 Setting to work, Martyn began the foot re-balancing process. Using digital support pads and dental impression material (Magic Cushion) he has been able to stabilise the Caudal (weight-bearing) part of the foot and by forging and fitting bespoke medial extensions to his shoes, he has begun to re-balance the limbs themselves. (See before and after x-rays).

Since Martyn first shod Pea he has been between 95% and 100% sound and remains like that today – we’ve even been given the all clear to get cantering out on our hacks! Pea now has his own library of information and we regularly reference the different thermographs, scans and radiographs and which show us both how his legs and feet should and shouldn’t look!

Bar the support that we have received from our “Village”, one of the things that I fully believe has been integral in Pea’s progress has been his regular visits to the Cold Salt Water Spa at Flawborough Equine. Sea water has long been used in the treatment of inflammation and injury in both humans and, according to Emma Hawthorne,  Flawborough Equine proprietor and general all round amazing lady, horses are no exception.

Spa therapy can accelerate healing and repair over a wide range of injuries of the lower limbs from tendon injuries to the most grotesque wounds. In a safe and controlled manner, equine hydrotherapy spas greatly intensify the natural healing effects of cold running sea water. The spa uses jets of aerated chilled saline water to reduce inflammation and speed up the healing process.

Other benefits of Hydrotherapy come with the relaxation that it encourages. Many horses use hydrotherapy as part of their weekly maintenance programme and for a wide range of competition horses, who work consistently at a level which puts strain not just on their physiology but also their mental fitness, Hydrotherapy is a tool which allows the horses to experience refreshment of body and mind. It allows them to lengthen their muscle fibres and return their bodies and minds to a natural equilibrium following intense exercise. 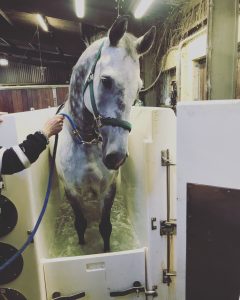 Equine Spas work on the lower legs, treating them with very cold salty water accelerating healing and repair due to a number of factors:

The water is kept at 2ºC which firstly takes out heat and inflammation but also means that when the horse leaves the Spa it promotes a big increase in circulation to the affected area. Salts act as a poultice and draw out infection, as well as creating an additional cooling effect and the depth of water applies pressure to the injured area working with aeration to massage the limbs which encourages circulation and healing.

Another of the magic ingredients in the “keep Pea sound and supple” recipe is his FMBs Activo-Med Combi Pro Rug. I use this on both of my horses as I fully believe in the FMBs’ ethos that prevention is better than cure. My 4 year old wears it before EVERY ride as she genuinely feels so much softer and more supple so I figure she is happier after wearing it than she is before! And as for Pea, he tends to have it on twice a day every day. As well as the positive benefits listed below it seriously helps him to relax and I firmly feel that if he is in any discomfort at all then he will benefit from as much relaxation as we can possibly provide for him! 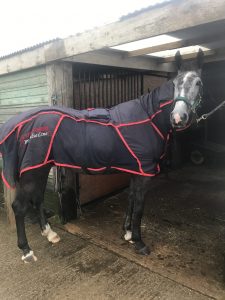 One of the most exciting things to come from Pea’s journey is that I now get to help promote two of the companies that I have been working with to both diagnose and treat Pea. Sticking to my promise that I would only work with businesses that I truly believe in I feel incredibly lucky that I can now count both FMBs and Flawborough Equine as two of my wonderful clients (and I’m even in talks with another one too!)

Since Martyn first shod him, Gilly began her regular treatments, Gerard gave his analysis, James of Home Farm Equine conducted his x-rays, Emma welcomed us to Flawborough Equine and,  allowed us to use the Spa on a regular basis and I religiously use his therapy products (including an FMBs Activo-Med Pulse Magnetic and Massage rug, EQ Streamz bands, invaluable Back on Track Mesh rug and Premier Equine Infrared leg wraps) at home, he has been between 95% and 100% sound and remains like that today – we’ve even been given the all clear to get cantering out on our hacks! 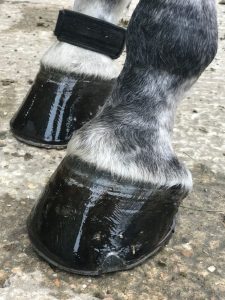 Pea now has his own library of information and we regularly reference the different thermographs, scans and radiographs and which show us both how his legs and feet should and shouldn’t look! It genuinely takes a village to rehabilitate a horse as special as Pea on the road, with each person playing their own part in the pie chart. Successful rehab could not be achieved without each and every one of them.