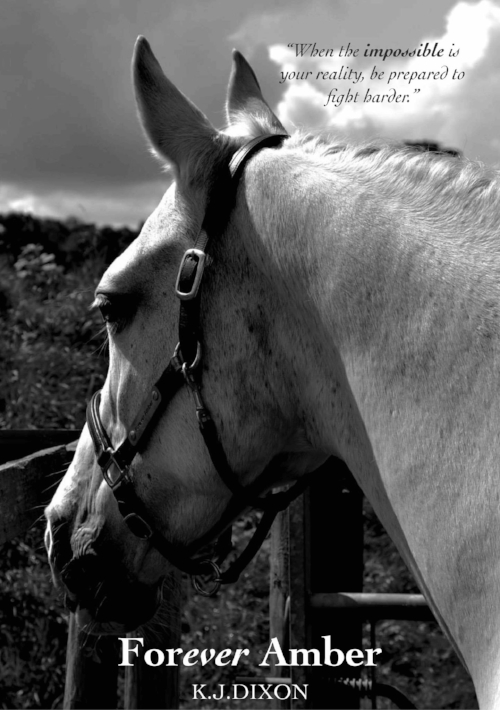 When Katy Dixon, the narrator of the memoir Forever Amber, gets her first pony she doesn’t care that the pony is too much for her, she wants a pony and is determined to get one. This strength of will is something that shines out in the book.

After years of Katy pestering her parents when she is eleven they finally cave in and buy her Amber.  After years of plodding riding school ponies Katy was unprepared for something forward going, as she recalls, she ‘knew nothing, her parents even less.’ The disastrous first ride on Amber would have probably alerted more knowledgeable parents, but even though Amber galloped around in circles with Katy clinging to her neck, like something out of a Thelwell image, they bought her.

Over the next two years Katy learned to ride the naughty Arab x Connemara. Readers who remember being pony mad youngsters will identify with Katy’s love for her 14.2 strawberry roan. It did not matter that she was impossible to bridle and bucked in protest if made to do anything she didn’t like, such as dressage, she was a pony and belonged to Katy that was enough. .

Aged fifteen Katy was too old to compete in Pony Club competitions and so did everything else with Amber such as endurance, carriage driving and even, inspired by the Devils Horsemen, stunt riding.

When Katy when to University Amber went out on loan, she came back after a few years and the two had both changed.  Katy, took Amber to a livery yard in Bristol when she got a work placement there. One evening she came in from the field with a cut which did not seem to be too serious, but within a few days she was diagnosed as having a non-displaced fracture of a splint bone, plus a cracked cannon bone and was clearly in a lot of pain.

The situation deteriorated during the night, Amber became very ill, she was unresponsive and had suspected salmonella and no one knew if she was going to survive or not.

The book charts the heart rendering story of the days when Amber’s life hung in the balance. Katy sticks by her side, determined that whatever the outcome she will be beside her pony.

This is a tear jerker of a story, spoilt in places by poor editing and proof reading, but beautifully illustrated with Katy’s hand drawn pictures of her beloved pony. It is accompanied by lovely photographs of the vets, Duncan Ballard and Sam Bescoby of B&W Equine Vets Clinic, plus Terri Hill of Hill Livery who played such a huge role in helping Katy during Amber’s illness.

It is that love that shines through in the text in a touching story of a pony mad childhood that fades as the adult world takes over, but that resurfaces when Amber becomes desperately ill.

It is that love that gives Katy the strength to keep fighting for Amber no matter what the outcome of her illness will be. Read this with a box of tissues beside you and then go out and hug your horse.

To purchase your own copy of Forever Amber, please click HERE