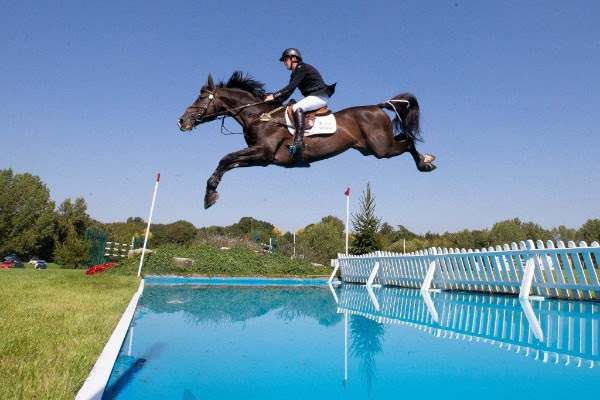 A total of 74 starters came forward for the Grand Prix, which is the feature class of this four-day national championships, with eight combinations jumping clear in the first round.

First to go was Breen Equestrian stable jockey Georgia Tame, who set a target of 48.30sec, but next to go Shane managed to shave more than 4sec off her time to take the lead.

The in-form Yazmin Pinchen almost secured her third 1.40m win in the space of four days but had to settle for second place with Van De Vivaldi, having finished 0.13 sec slower than Shane.

This summer Shane Breen has won the Bunn Leisure Derby Trial and the British Speed Classic with Can Ya Makan, who was also third in the Al Shira’aa Derby, and he was victorious with Clyde VA in the Hickstead Masters’ Trophy. He is married to Chloe Breen, the daughter of Hickstead founder Douglas Bunn, and is based at Hickstead Place so this is his home show.

Today’s win was also an ideal final run for Shane before he heads to Tryon, having had a late call up to the Irish showjumping team of four for the FEI World Equestrian Games.

“You don’t think he’s very quick and he’s a bit lazy, but he’s got such a long stride,” said Shane of his winning ride. “When he won at the June show I didn’t think he had a chance and that surprised me, but having won that class I knew he could do it today.”

Quite a number of riders failed to complete the course in the Grand Prix, with Hickstead’s famous open water causing the majority of the issues.

Having finished seventh in his debut in the Al Shira’aa Derby in 2015, Alfie Bradstock knows what it takes to jump Hickstead’s famous fixed obstacles – and he proved that again when winning Saturday’s Douglas Bunn 1.35m Challenge.

A total of 43 combinations came forward for Saturday’s feature class, which includes a number of the Al Shira’aa Derby fences set at a lower height. Former Junior European eventing gold medallist-turned-showjumper Alfie had three horses entered, and as well as winning with Eebay he also took fifth place with H D Or.

Eebay is owned by Helen West, who runs Bicton Arena, and the 11-year-old gelding previously competed up to Advanced level with Helen before Alfie took over the ride in May.

“He’s qualified for the Talent Seekers at HOYS and he jumped his first Area Trial at Edenbridge and Oxted where he came third,” said Alfie.

The third of his rides, Ferdi I, is quite young and Alfie explained that the class was more of a trial run for him, but for his two other rides he very much has the Al Shira’aa Derby in mind.

“The other two I’m definitely considering bringing them back in June,” he said. “It’s useful to go up and down the bank, jump through the Dyke, and the double of water ditches, to see if they’re anywhere near ready for the Derby!”

Alfie made it a double in the International Arena when winning Sunday’s All England 1.20m Open Championship.

Six riders made it through to the jump off in the 1.20m Open, with Alfie setting a quick time on the diminutive mare Grand Cru I to take the win ahead of John Crippen and Loughnatousa OB.

West Sussex-based Yazmin Pinchen also secured a double of Hickstead wins during the All England Jumping Championships, claiming both 1.40m Opens with Van De Vivaldi on the first and second day of the show.

A total of 111 starters came forward for Thursday’s class, which was the first to be held in the International Arena. Nineteen made it through to the jump-off, but Yazmin was able to set a strong time that no one else could catch.

“It wasn’t my best jump-off to be honest, we could have gone quicker,” she said. “I’m obviously delighted with him, but I was worried the time could be beaten. But at his best he’s unbeatable against the clock, he can take a stride out so easily and he’s so careful.”

The pair proved just on Friday when winning again, this time against 112 other combinations. “We really like Hickstead – my incredible Vinny does it again, what can I say,” said Yazmin.

Friday was a showcase for up-and-coming equestrian talents, with the finals of the Four-, Five- and Six- & Seven-year-old Championships.

Eleven combinations jumped clear to share the Four-Year-Old title, while the Five-Year-Old honours went to Ronnie Jones and Interstar B with Harry Whall and Kings Borough Kasper in second.

In the All England 6 & 7 Year Old Championships, the winner and runner-up both came from the six-year-old division, with Matthew Sampson winning on the mare Happy Fomia, ahead of Lucy Townley and the Billy Stud’s Billy Spiral.

“She’s owned by Harry Whall from the Moorby Stud, who I’ve started riding for recently,” said Matt, who is the reigning British Speed Derby champion. “She was second recently in the Six Year Old Grand Prix at Addington so it’s nice to go one better. Her next stop will be Zangersheide for the Young Horse championships so fingers crossed she’ll go well there, she’s a lovely horse.”

Matthew’s evidently honing a talented string of horses for the future, as he also claimed the British Showjumping Talent Seekers qualifier with Geneve R, ahead of Nicole Pavitt on Paris 16 and Gianni HC in second and third respectively.

Three other championships took place in the International Arena on Saturday. Barry Drea, whose daughter Maisie has ridden on the British showjumping team on a number of occasions, won the first of these – the All England 1.20m Amateur Championship, riding Okehurst Miss Mexico.

The final class on Saturday was the Spidge Photography 1m Open Championship, which attracted huge entries with 158 competitors in the first qualifier and 221 in the second. The final saw 31 combinations come forward, with the win going to Nick Edwards and Its Showbusiness.

Joseph Trunkfield and Fanella I were the victors in Sunday’s All England Novice Championship, the first class of the final day of the show, while the All England 1.30m Open Championship went to Matthew Sampson and Ebolensky, giving Matthew his third major win of the show.

The four-day national All England Jumping Championships drew the 2018 Hickstead season to a close.