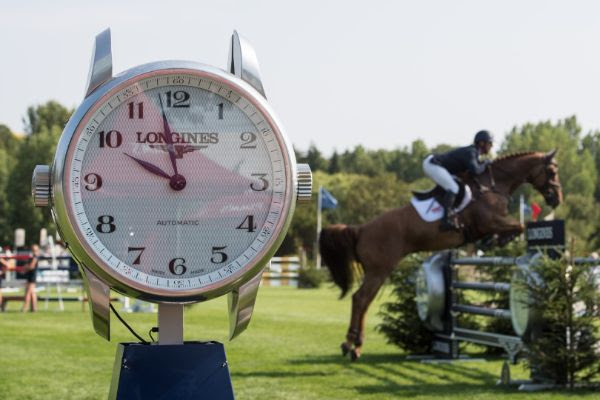 3,500 horses and ponies head to Hickstead

The Longines Royal International Horse Show will see around 3,500 horses and ponies of all shapes and sizes head to Hickstead in West Sussex this week (23-28 July).

The five-star event is one of the oldest horse shows in the world, featuring international and national showjumping alongside championship showing, arena eventing and carriage driving. Hickstead competitors range from children as young as two, who will be taking part in the Total Waste Management Ltd Mini Challenge, while legendary showjumper John Whitaker makes yet another Hickstead appearance at the age of 63. There will be eight rings in action throughout the show, with thousands of amateurs competing as well as leading international stars such as Ben Maher, Marcus Ehning, Peder Fredricson, Laura Kraut and Jessica Springsteen.

The show gets underway on Tuesday 23 July, with a busy day of national jumping and showing classes. The action in the Longines International Arena begins on Wednesday 24, with a full programme of British Showjumping Winter Finals as well as showing classes for Arabian horses and show hunter ponies.

The international showjumping classes begin on Thursday, with the Bunn Leisure Vase and the Bunn Leisure Trophy, while showing highlights include the hunters and the Mountain & Moorland ponies. The feature class of the day is the MS Amlin Eventers’ Challenge, which features several of the eventing world’s biggest stars competing over a challenging cross-country track within the Longines International Arena.

Friday’s focus is the Longines FEI Jumping Nations Cup™ of Great Britain, a prestigious team competition that gives British showjumping fans their only chance to watch their nation compete as a team on home turf. Great Britain will be hoping for their first victory in their home leg since 2010, with Ireland, USA, Brazil, Belgium, Sweden, Germany and Italy also aiming to lift the Edward, Prince of Wales Trophy. Showing enthusiasts can look forward to the working hunters and the riding horses.

Saturday is Ladies Day, so all those who come dressed to impress could be in with a chance of winning one of the luxury prizes on offer. Show visitors are also encouraged to stay on at the showground for the #10forTim charity race in the evening. It’s set to be a fun occasion, with a choice of bustling bars and restaurants open, plus live music and a bucking broncho – plus plenty of big-name equestrian stars who will be donning tracksuits and trainers and sprinting for the finish, having raised thousands of pounds for the Tim Stockdale Foundation in the process.

The show draws to a close on Sunday 28 July with the Longines BHS King George V Gold Cup, won last year by 22-year-old Dutch rider Kevin Jochems. The last British rider to win was Ben Maher in 2013, and his winning ride that year was Tripple X III, who also took Ben to Olympic gold in London 2012. Tripple X III will be retired shortly before this year’s class.

Sunday is also the biggest day of the week for the showing competitors, with both the British Horse Society Supreme Ridden Horse and the De La Hey Family Supreme Pony Championships taking place.

There’s something for everyone at Hickstead, including the Family Fun Zone, with fairground rides plus fun and games from children’s entertainer Tomfoolery, plus the brand new Hickstead Hoedown area, featuring wild west-themed crazy golf, a climbing wall and laser clay shooting. Visitors can explore the culinary delights of Hickstead’s Food and Drink Market, and browse the vast Charles Owen Shopping Village with more than 200 tradestands. Under-fives go free, with discounts available for children and families.

Tickets for the Longines FEI Jumping Nations Cup™ of Great Britain at the Longines Royal International Horse Show (23-28 July) are on sale now from www.hickstead.co.uk, or can be purchased at the gate.

Three days of the Longines FEI Jumping Nations Cup™ of Great Britain at the Longines Royal International Horse Show will be shown live on Sky Sports.

The live broadcasts will include the action on the afternoons of Friday 26, Saturday 27 and Sunday 28 July, including international showjumping highlights such as the Longines BHS King George V Gold Cup, the Science Supplements BHS Queen Elizabeth II Cup and the Longines FEI Jumping Nations Cup™ of Great Britain. Sky’s coverage will be produced by renowned sports broadcasters IMG.

As well as live TV coverage, the feature classes on Friday and Sunday afternoon will also be streamed round the world on FEI.TV.

The Wednesday and Thursday of the Longines Royal International Horse Show will also be streamed on ClipMyHorse.TV and Hickstead.TV, with highlights such as the MS Amlin Eventers’ Challenge being shown alongside some of the other international showjumping classes.

Hickstead.TV will be available throughout the event.